I had known about bullfighting in the local area for a long time but it took me over a year after I moved to Hat Yai to actually get to an event. In Hat Yai the fights are usually held on the first Saturday of the month.

The Institute for Southern Thai Studies contains paintings and exhibits depicting bullfighting. If you live in southern Thailand there is no need to attend a bullfight to see bulls. The owners keep the bulls in shape by walking them around the streets and to see a bull out walking with its owner is quite a common sight. 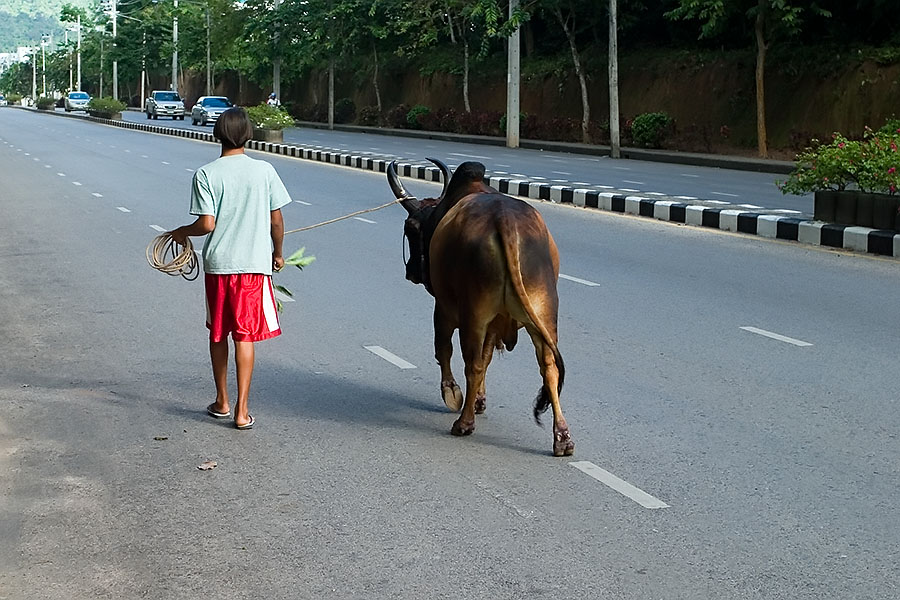 If you drive in Thailand you must expect anything and everything 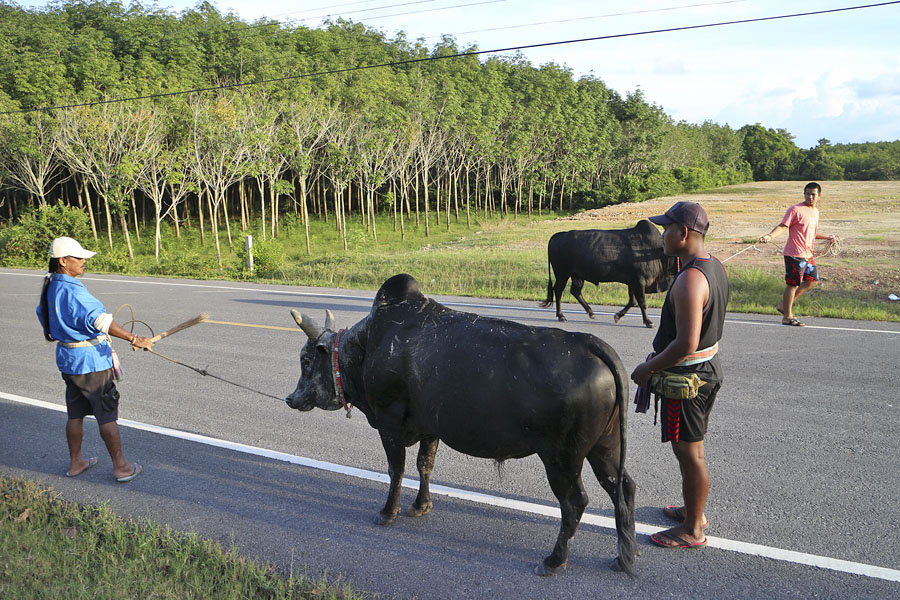 Taking the bull for a walk

Some months I just plain forgot and at other times I tried to get along but was given bad information by locals. There was also another factor. Although I was keen to see what went on I do not like 'sports' which involve cruelty to animals so I was a bit reluctant to go. 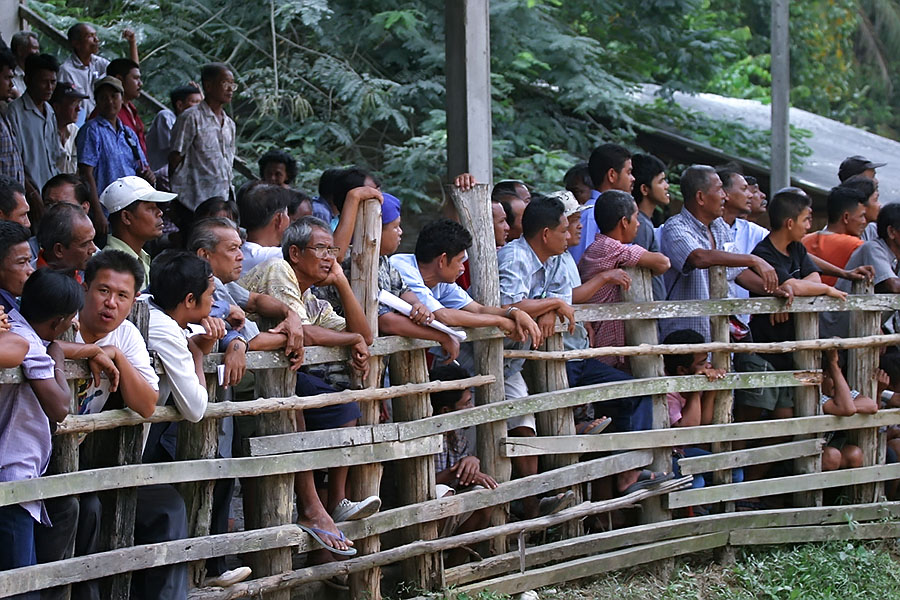 Waiting for the bullfight to begin, Hat Yai

For accurate information about dates and venues it is best to contact the Tourist Authority of Thailand (TAT)'s Hat Yai office on 074 238518. Another number to call for information is 074 251143 but, to be honest, I'm not sure who this is exactly. If you miss the Hat Yai event but are desperate to go there are other venues nearby such as at Rattaphum and Phattalung which stage fights at different times of the month. 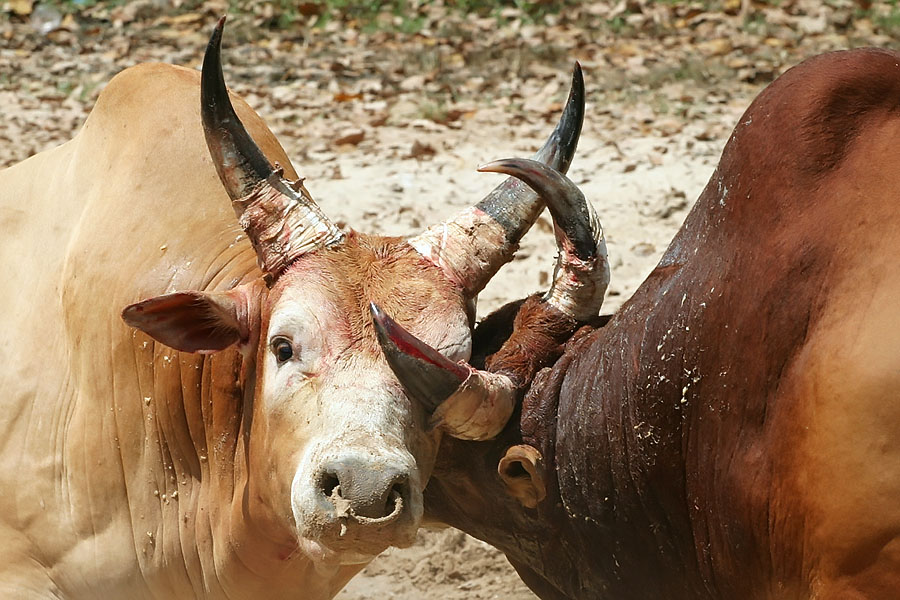 The Hat Yai bullfighting arena is at Baan Neun Khun Tong which is located on the way to Hat Yai airport from town. Off the main airport road there is a turning right and the arena (stadium sounds too grand for what it actually is) is about a five minute walk on the left-hand side.

There are a few different options to get there. The cheapest is sawng-thaew from the clocktower on Phetkasem Road for about Bt10. However, you'll need to know where you are going so you know where to get off. Failing that, you need to be with a Thai or speak Thai well enough to be understood by Thais who are not used to hearing farangs speak their language.

Tuk-tuk is another option but the distance would make it a very uncomfortable ride and the driver would probably want a lot of money. The easiest and most comfortable (but most expensive) option is by taxi for Bt180. I chose to take a taxi for this, my first, visit but now I know where it is I would be happy taking a sawng-thaew next time. Getting a sawng-thaew back to Hat Yai was easy and far easier on my pocket at just a fraction of the taxi fare.

Gambling, as with most sport in Thailand, is the main attraction with bullfights

The crowd are mostly Thai but I spotted four farangs the first time I went. Lonely Planet mention bullfighting in their Thailand guide and a few of the farangs I saw looked like Lonely Planet readers - one girl was even clutching her LP guide and reading it while watching the main event.

I was convinced that dual pricing would come into effect and I would be charged more to get in than the locals but much to my surprise this didn't happen. Perhaps they don't get enough farang spectators to have cottoned on to this trick yet? The entrance fee was Bt100.

The arena (stadium?) is about the same quality as Hat Yai's Thai boxing stadium. Let's just say that every expense has been spared. As I walked in I noticed a lot of Thais at the lower end of the social hierarchy, some of whom were leading bulls on pieces of rope. There were lots of parked pickup trucks and motorbikes indicating a big crowd. 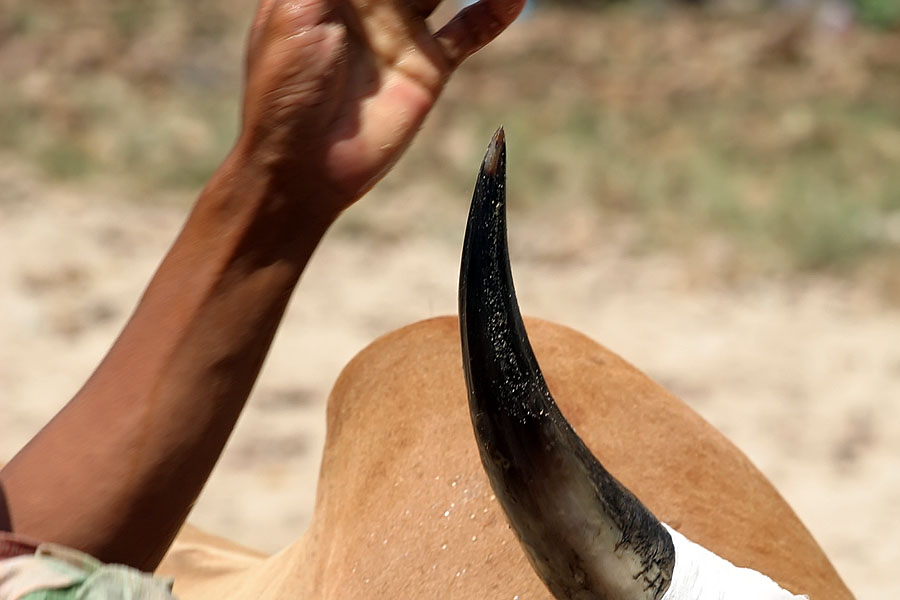 The pointed tips of the bulls' horns are seriously sharp

I paid my money and wandered in. In the arena two bulls were engaged in a fight. Head-to-head, they had locked horns but there wasn't much happening. I noticed a farang couple who just looked stunned. Their faces were expressionless and although they had cameras they weren't using them.

I got out my camera, found a shady place to stand at the fence surrounding the bull ring and took some photos. Water had been poured into the middle of the arena to deliberately make it muddy and slippery. Occasionally one of the bulls would slip and the other would press home its advantage. Whenever any action like this took place the crowd would go wild, waving their betting slips in the air.

At this stage, I have to point out, I had no idea how each bout would end. Would one of these fine animals be killed to determine the result of the fight? The sharpness of their horns was something that took me by surprise. Each horn had been honed into a very sharp point. 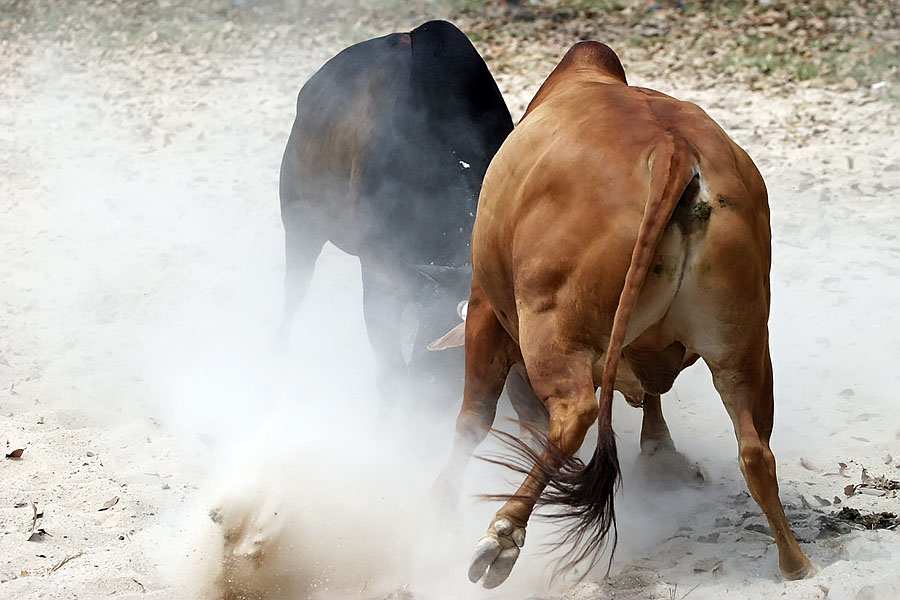 A cloud of dust as the bulls go for each other

Although the bulls were static most of the time the sense of their power was overwhelming. As they pushed against each other I could see their body muscles rippling. I had visions of one animal slipping and the other then piercing its skull with a razor sharp horn backed up by thousands of pounds of force.

Not knowing how it would all end started to make me a little queasy and I began to understand the expressions on the farang couple's faces. I think I had also adopted a stunned expression by this time.

I was also unsure as to how long the bout would go on for. Most of the contest was fairly static but I was aware that just holding the other bull at bay was sapping the strength of each animal and that it couldn't go on indefinitely. 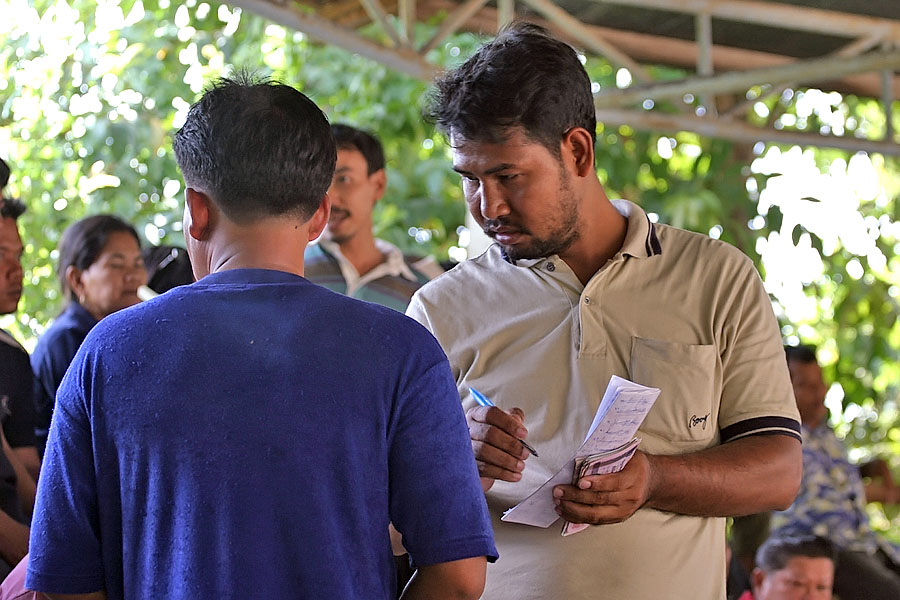 After about 20 minutes the weaker bull decided that he'd had enough. He turned his back and ran off. Contest over. The crowd went wild and those who had backed the winner collected their winnings. For me it was a great relief that neither of the bulls had been injured.

After a short break two more bulls were paraded into the ring. Their coats had been shampooed and blow dried and they looked as if they were being entered in the local agricultural show. Their owners held ropes which were attached to rings in the bulls' noses.

They were led around the ring so the crowd could take a look before placing their bets. Their sharp horns had been covered with tape which was then removed. Their heads were doused in water and bananas mashed over their faces. 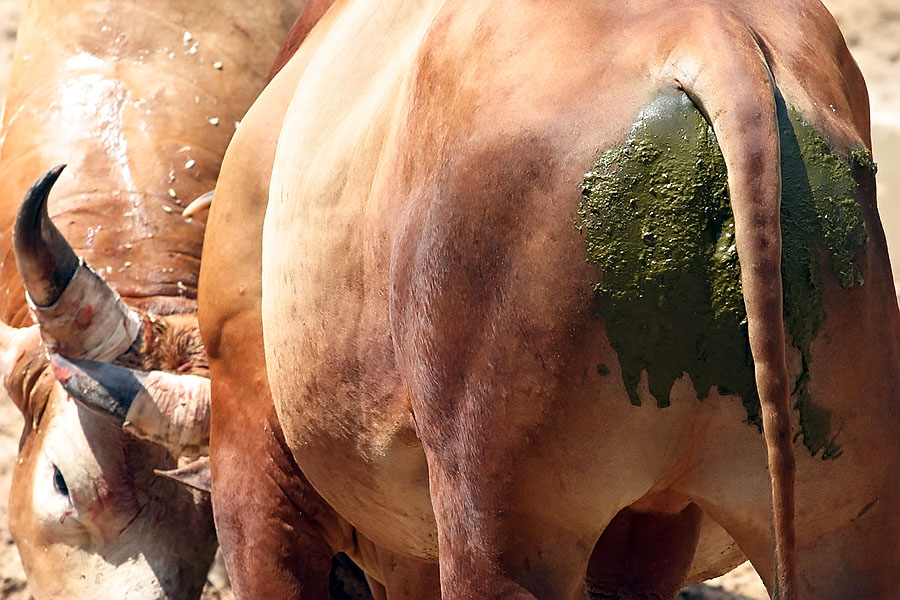 Once the two animals had been prepared - and bets placed - they were brought face-to-face and the ropes through their nose rings were removed. The second bout quite amused me. One of the bulls obviously thought to himself, "Sod this for a game of soldiers," and ran off. It was reminiscent of the gladiator scene in Monty Python's 'Life of Brian' where one guy doesn't want to fight and runs off.

Despite attempts to get a fight going, this one bull wasn't having any of it and they took him away. More bulls were brought in and this time a fight was successfully started. The next contest resulted in some blood which I didn't notice in the first one.

It's hardly surprising considering the sharpness of the horns and the force behind them. I would imagine that occasionally there are some very serious injuries and deaths. The bulls are no doubt aware of this and must get frightened, as evidenced in this photo.

After watching for a while I had seen enough. I wasn't there to gamble and as a spectator sport it wasn't my choice of entertainment. It was hot too and like a dust bowl. The ground was parched and the bulls were kicking up lots of dust.

As a race I don't believe it is right for us humans to use animals this way for our own entertainment. However, compared to some other blood sports it seems slightly more humane because at least an animal doesn't have to die for a successful conclusion. 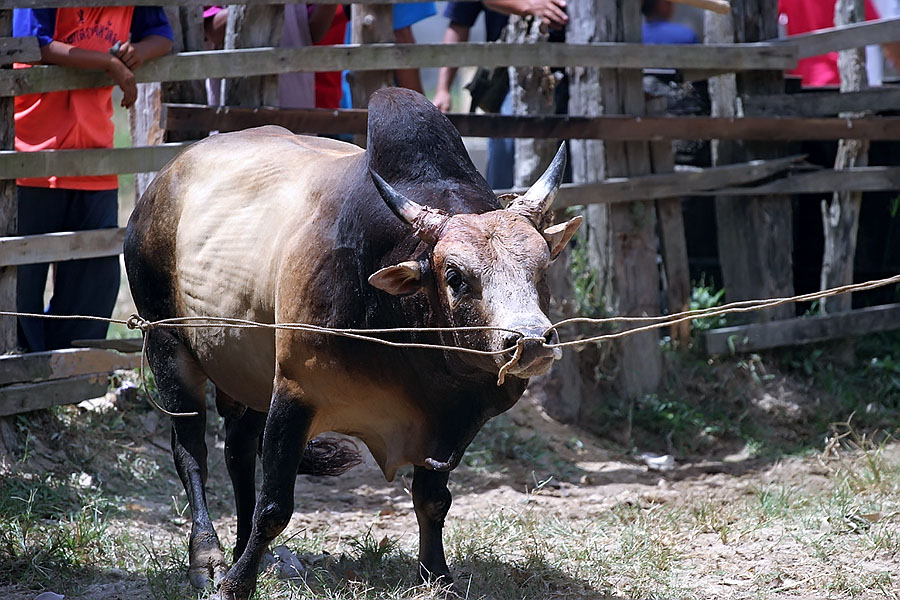 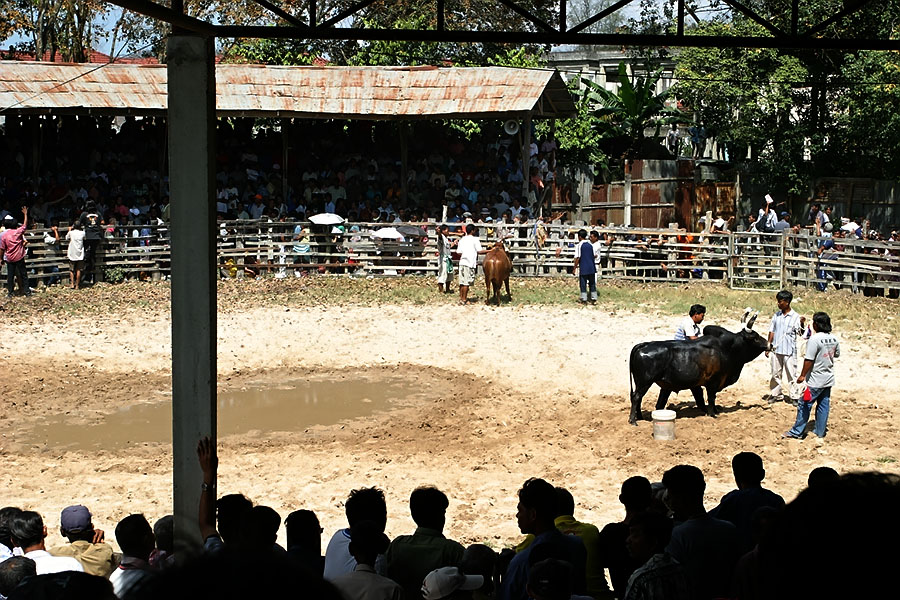 Final preparations before the bullfight 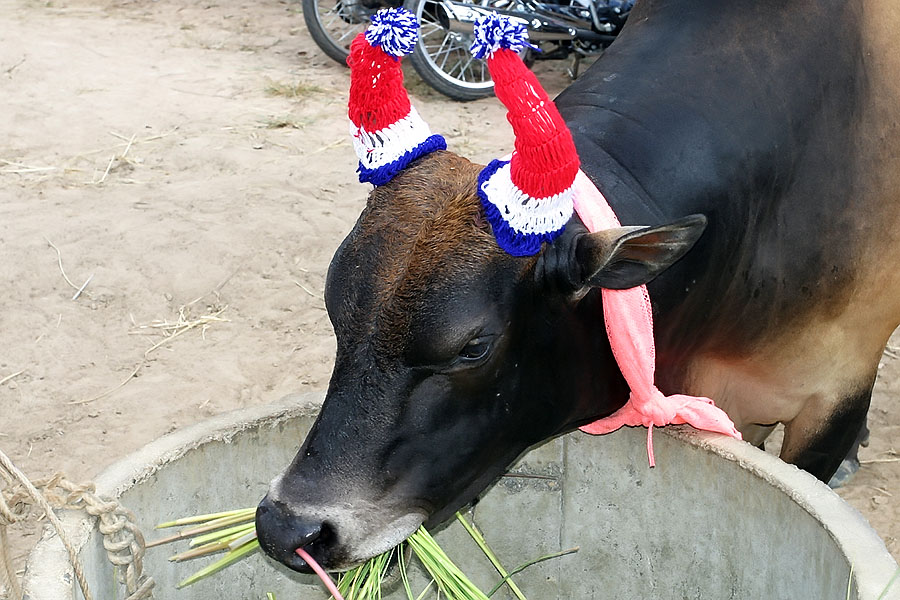 A much more natural activity for these fine creatures 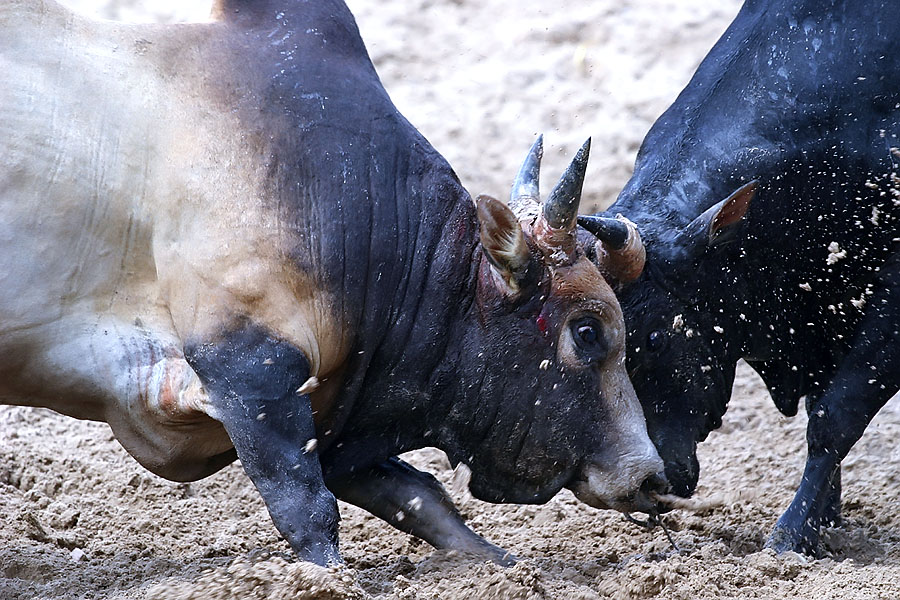 The Hat Yai bullfighting arena is one of 16 such venues in southern Thailand. Bullfights take place once a month on the first Saturday of the month, unless it is a religious day (wun pra in Thai) in which case the fight is postponed for a few days. 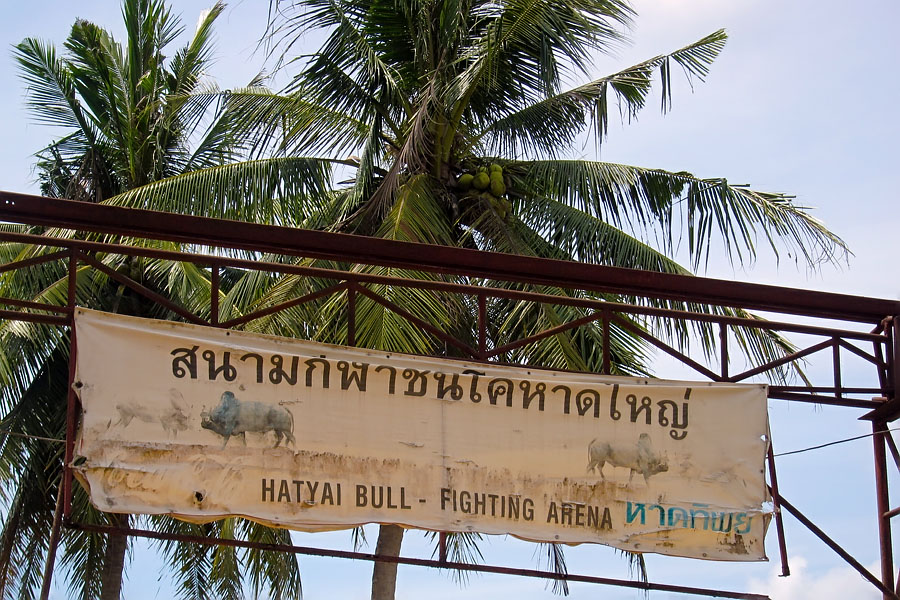 The people who run the arena publish a flyer with details of the next bullfighting day, however, there doesn't seem to be a convenient way to find out dates more than one month in advance.

If you're in town just before the first Saturday of the month you can visit the arena to find out the next fight date. Alternatively, visit the local Tourist Authority of Thailand (TAT) office.

Before fight days you often see bull owners walking their beasts around town. It is highly unlikely that any of these men will be able to speak English, but if you can speak some Thai they will tell you when the next fight day is.

To get to the arena from central Hat Yai go over the railway bridge past the police station and through Hat Yai Nai. Turn left at the large intersection towards the airport. You will come to another large intersection where you will see Thai Watsadu on the corner.

Go straight on at the intersection (Airport Road) for about three-quarters of a kilometre and turn right down a small road. Then after about half a kilometre turn left. After a couple of hundred metres you will see a dirt track on the left that leads to the arena.

If you have a SatNav device, simply plug in the following coordinates:

Get The Best Deal On Your Hat Yai Hotel Room

Each link will take you to the relevant page on the Agoda website where you can see photos, read reviews, and book on-line. I use Agoda to book all of my own hotels in Thailand and the Southeast Asia region. Agoda hotel rates are usually always the lowest and I have received good customer service, therefore I am happy to recommend the company to other people. Here is some analysis I did regarding booking hotels in Southeast Asia.