Do not use drones without permission

Drone technology has added a completely new dimension to photography and videography and I have enjoyed watching some great drone footage on YouTube, including footage shot in Thailand.

Many parts of Thailand are very scenic and an obvious draw to drone enthusiasts, especially those people who monetise their YouTube channels to pay for their travelling.

When drones first appeared it was no big deal to fly them anywhere, but with so many people operating drones these days that has all changed now. The regulations below came into effect on 9th January 2018. 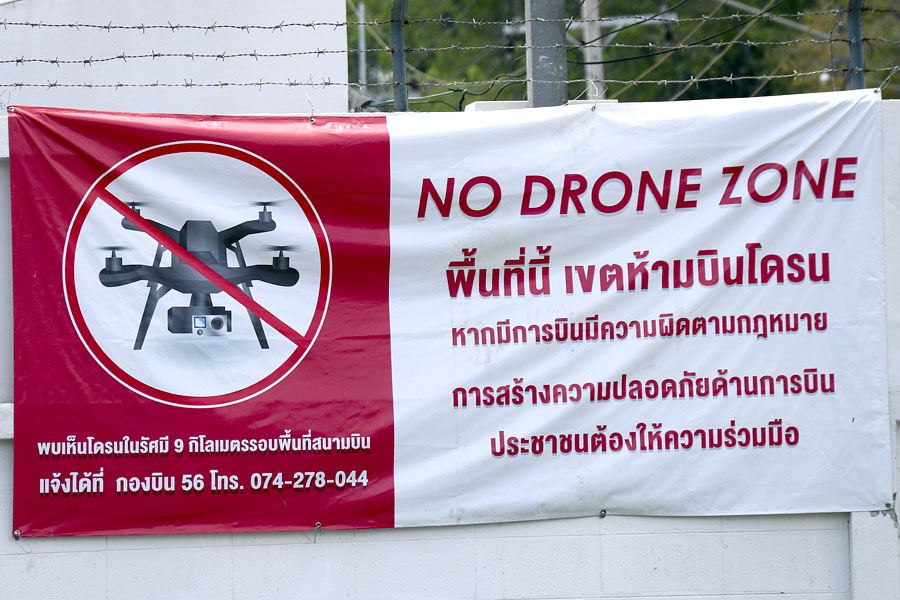 In essence, you can't simply arrive in Thailand with a drone and start flying it wherever you want. There are restrictions on where you can use drones, how you can fly them, and also you need to obtain the relevant documents first that allow you to fly a drone.

If you fly a drone in a completely isolated area you probably won't get caught, but the places where you will want to fly your drone probably attract other tourists and the Thai authorities are now clamping down on unauthorised drone activity.

If you want to fly a drone in Thailand, first make sure that you obtain the necessary paperwork, and then make sure you only fly your drone in accordance with the regulations. In addition, I believe it is necessary (or at least advisable) to have some kind of insurance. 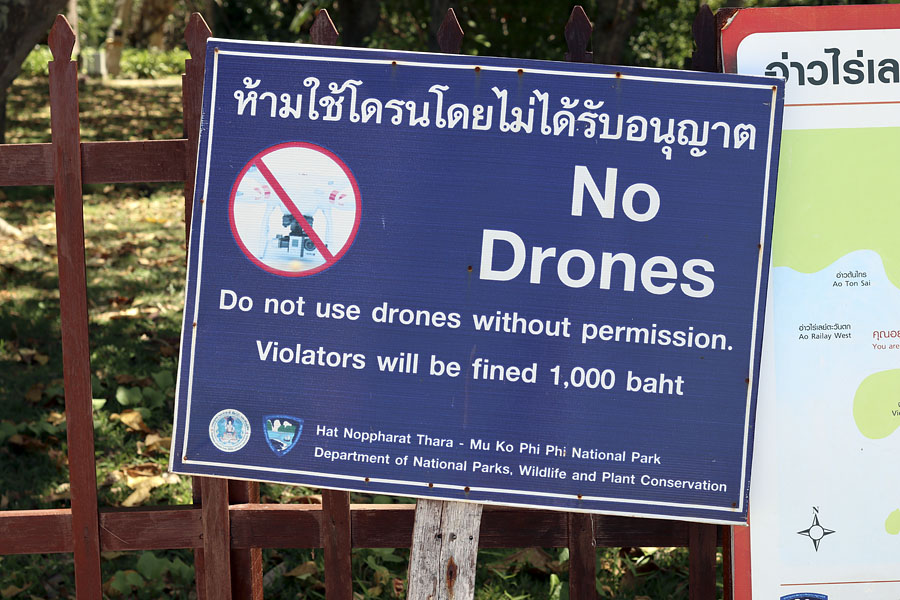 This sign is actually quite misleading. A Bt1,000 (US$32) fine probably won't deter anyone, but the actual punishment can be a five year jail term or a fine up to Bt100,000 (US$3,200) for flying an unregistered drone. 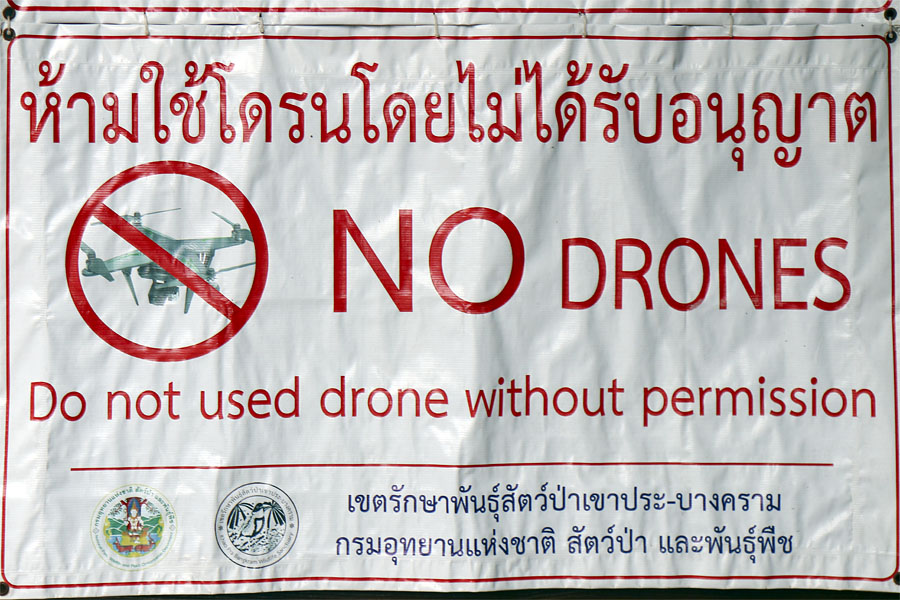 Do not use drones without permission, Emerald Pool, Krabi

Drones cannot be flown legally in many parts of Thailand.

Firstly, there are no restrictions on bringing drones into Thailand, therefore if immigration or customs discover a drone when you enter the country you are unlikely to have a problem. The potential problems begin if you fly your drone without authorisation, or if you fly it in a way that violates the rules and regulations concerning drone activity.

If your drone has a camera and is heavier than 2kg you need to register it and receive permission to fly it through the National Broadcasting and Telecommunications Commission (NBTC). This is for personal use only - posting to your YouTube channel, etc.

If the drone is to be used for commercial purposes you also need to register it with the Thai Civil Aviation Authority of Thailand (CAAT). If you don't do this, you may be subject to a Bt40,000 fine and/or a year in jail. Furthermore, if the drone is in excess of 25kg it must also be registered with the Thai Ministry of Transport.

Once you have permission to fly your drone there are rules and regulations to observe, but these are simply common sense and probably no different to the rest of the world.

These are the published rules and regulations, but let me add a few more examples that you should be careful about.

Firstly, although the graphic mentions hospitals it would also be advisable to stay away from any military or government installations, the filming of which might be considered a violation of national security.

Secondly, Thailand has the most revered monarchy in the world and the Crown Propert Bureau (CPB), which is the institution that manages the property of the crown, manages about 8,300 rai in Bangkok and about 33,000 rai in the rest of the country. A rai is a Thai unit of land measurement equivalent to 1,600m2.

Throughout Thailand there are a lot of royal properties and the general public isn't very welcome. Near to where I live is a model farm owned by the CPB, guarded by armed soldiers. I've tried to get in a few times, but been politely turned away. The authorities would certainly take a dim view of someone flying a drone over somewhere like this.

To register your drone and receive authorisation to fly it through the National Broadcasting and Telecommunications Commission (NBTC), use this link. Unfortunately, it's in Thai but if you complete this form in Thailand you will be able to find lots of people who can translate for you.

If your drone is going to be used for commercial purposes you can register through the Thai Civil Aviation Authority of Thailand (CAAT) using this link.

As is usual with bureaucracy in Thailand, the registration process will require copies of your passport, photos and serial number of the drone, and other documents.

I'm not sure what tourists can do if asked for proof of address. In recent years Thai immigration has gotten very serious about foreigners living in Thailand providing proof of where they live.

Like other foreigners living in Thailand, I can produce house registration documents (either my wife's blue one or my yellow one), but tourists won't have access to such documents.

The golden age for drones is very much over. When they first appeared and the authorities didn't have any knowledge of drones people could fly them anywhere. Nowadays, everyone has wised up and virtually all countries have bans. I have heard that in some countries drones will be confiscated at the airport when you arrive.

That isn't the case in Thailand, you can still find places to fly drones, but they are banned in all the places where people would want to fly drones. It's sad because there are lots of locations in Thailand that are perfect for capturing drone footage, but that's the law.

If you arrive in Thailand with a drone you will need to register it in order to fly it legally and this could be a time-consuming process. Even if you go through this process you will probably find that you aren't allowed to fly your drone where you want to fly it. Even if there aren't outright bans, technically you are required to find the owner of the land to get permission to fly it. This would be a very difficult thing to do.

Foreigners in Thailand soon realise that the locals don't follow traffic laws and some follow suit. Some people may also be tempted to simply ignore Thailand's drone laws. My advice is always to follow the law in Thailand, even if you notice a lot of other people who don't follow laws. It's up to you, but the unauthorised flying of a drone can result in a large fine or even a prison sentence.