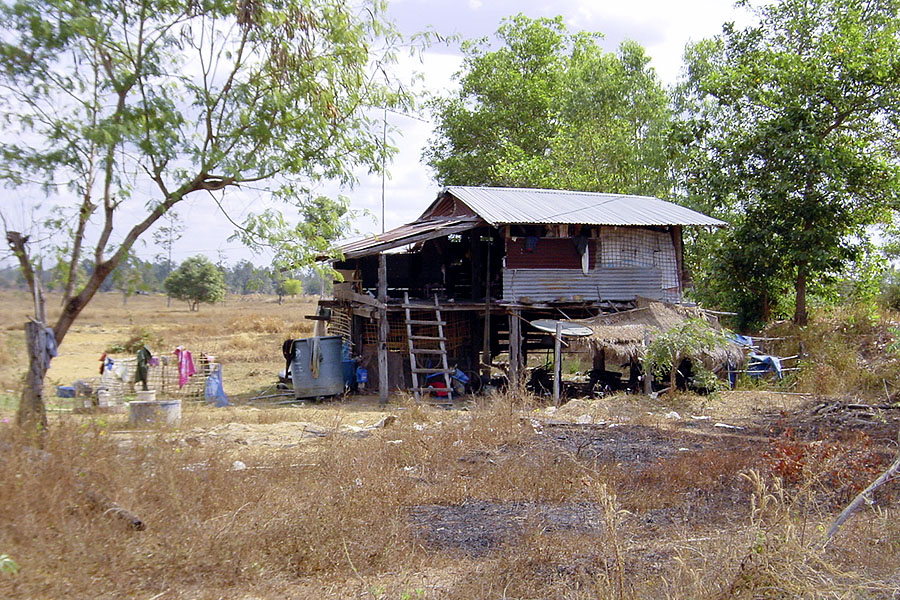 According to the publication 'Thailand Profile 1975' Thailand, in that year, had a workforce of 16 million and 14 million were employed in agriculture. That's a big proportion of the workforce and it wasn't that long ago.

Thailand is now classified as a Newly Industrialised Country (NIC) and with the growth in industry and tourism, along with more efficient farming methods, the proportion of the workforce involved in agriculture has decreased, but it is still a lot.

If you only ever visit Bangkok, tourist resorts and provincial cities you won't see a lot of agriculture, but if you venture into the countryside there are enormous swathes of rice fields, fruit orchards, rubber and palm oil plantations. 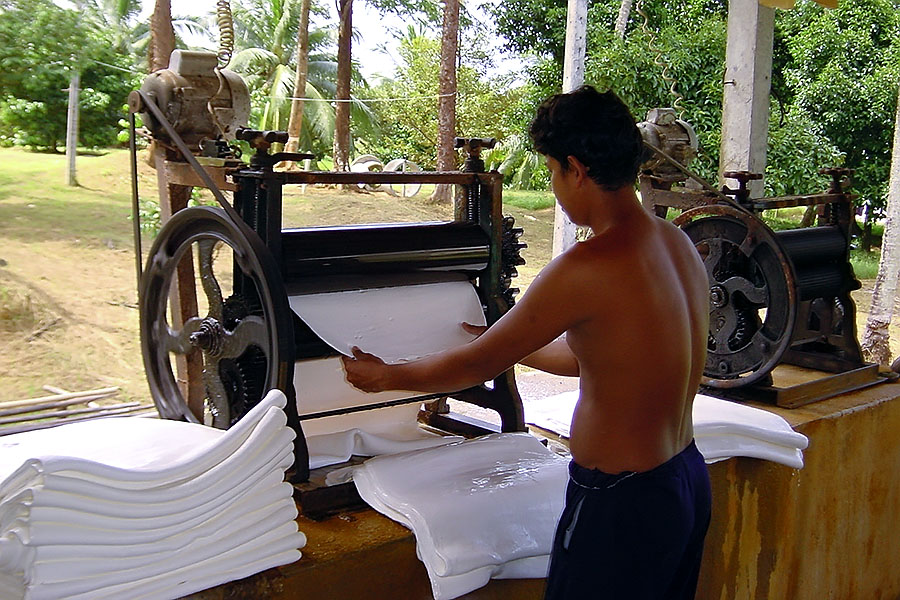 Rolling out rubber sheets ready to be taken to market

The majority of Thais live in a rural or semi-rural environment where life is basic, sometimes extremely basic. Crop production is a way of life for the ones who are fortunate enough to own land but many try to scrape by any way they can. People in the south are generally better off. There are more tourists, more coastline to earn a living from the sea, and you will notice many rubber plantations. The north, and especially the north-east, are the poorest areas of the country.

The Thaksin government announced that it aimed to eradicate poverty in Thailand in a time frame of five years or something. I found it interesting that they were targeting people whose monthly income was less than Bt800. Yes, there really are people in Thailand living on an incredibly small amount of money each month. Remembering things like this while in wealthy tourists areas of Thailand sometimes helps to put things in perspective.

Even though there has been (and continues to be) a huge rural migration to Bangkok, village life is at the heart of Thai society. The rural folk who move to cities and tourist resorts often only do so temporarily and, once they have earned enough money, return to their village. 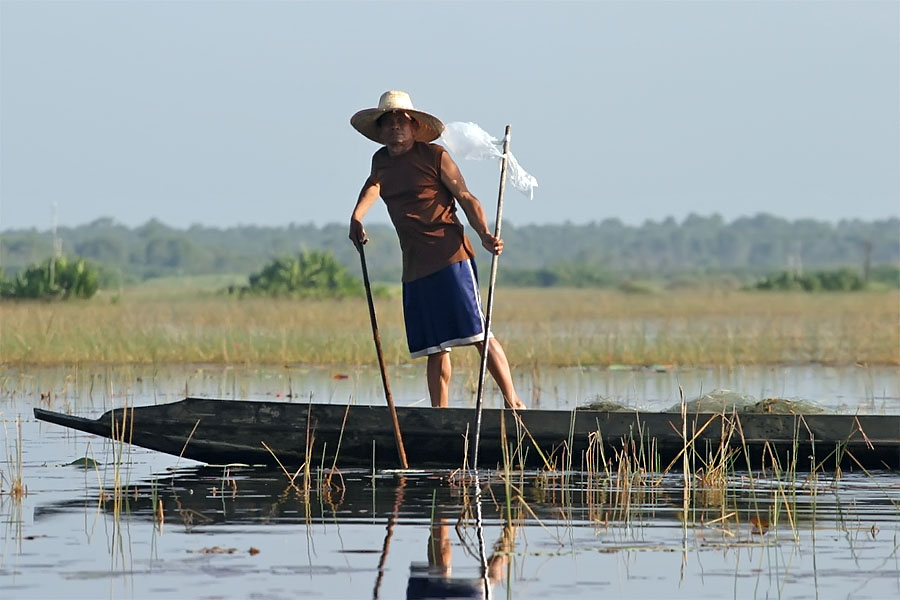 It is not unheard of for farang men who marry bar girls from Phuket and Pattaya to then move to where the girl comes from. This might help to explain why there are so many farangs living in rural Isaan.

The 2000 census classified 69% of the population as non-municipal, and 51% as agricultural. In other words, the majority of the Thai electorate are rural villagers. (Source: 'Thaksin - the business of politics in Thailand' by Pasuk Phongpaichit and Chris Baker.)

One of the factors in Thaksin's rise to power was targeting the rural folk with promises to make them richer in exchange for votes.

Villages are known as moo-baan in Thai and there is a fairly rigid organisational structure in place for the running of each one. Each village has a village headman poo-yai-baan, who has helpers known as poo-chuay-poo-yai-baan, and each sub-district has a gum-nun who is higher up in the hierarchy. This kind of hierarchical organisation is very typical in Thai society.

Villagers with a problem go to their village headman who will then progress it through the appropriate channels. The positions are part-time and a government salary is paid. Village headmen positions are open to women but they normally tend to be men. When I asked one of my female students why this was she told me that Thai women are too busy! Yes, I know exactly what she means.

People in these positions exert a lot of influence over the villagers so (again) it wasn't surprising that after Thaksin's decision to dissolve parliament during the 2006 political crisis he announced a proposal to increase their pay. A snap election had been called and the votes of the villagers were crucial so it was important to keep them sweet.

Thailand is very much an agricultural country and rice is by far the most important crop. 41% of the total area of the country has been given over to agriculture and of that 41%, 51% is used for rice production. It may not be noticeable from a Phuket or Pattaya beach but once you start driving north of Bangkok, through the central plains and into Lanna (the kingdom of a million rice fields) these statistics are very plain to see. 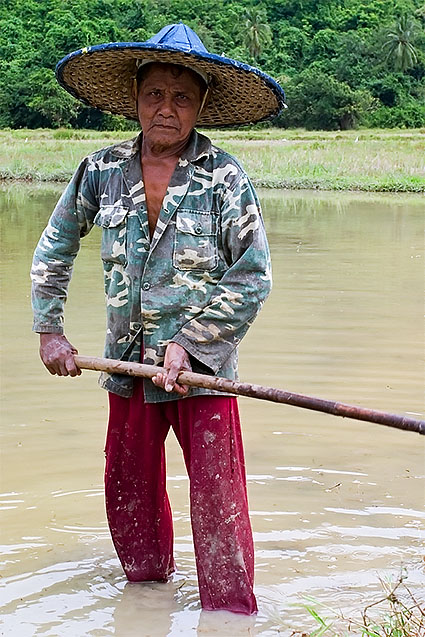 Not only is rice the staple food of Thailand but it is also the country's biggest export with Thailand in fact being the world's biggest exporter of rice. 60% of rice production is kept for domestic consumption, half of which is glutinous (sticky) rice - eaten mainly in the north and northeast.

The rice planting season begins in April or May and finishes around the end of May. Then comes the annual three-month Rains Retreat. In the north and central plains the rice harvest begins in late November or December. Harvesting ends in January or February but not in the south where the monsoon season is different.

Rubber - indigenous to South America - was introduced into Thailand around the turn of the 20th century. The first plantations were located in Trang province. Rubber was brought into Trang from Malaysia by Phraya Ratsadanupradit Mahison Phakdi in 1899. Initially planting was restricted to the Isthmus of Kra but then plantations were established in the eastern and more recently in the northeastern regions. 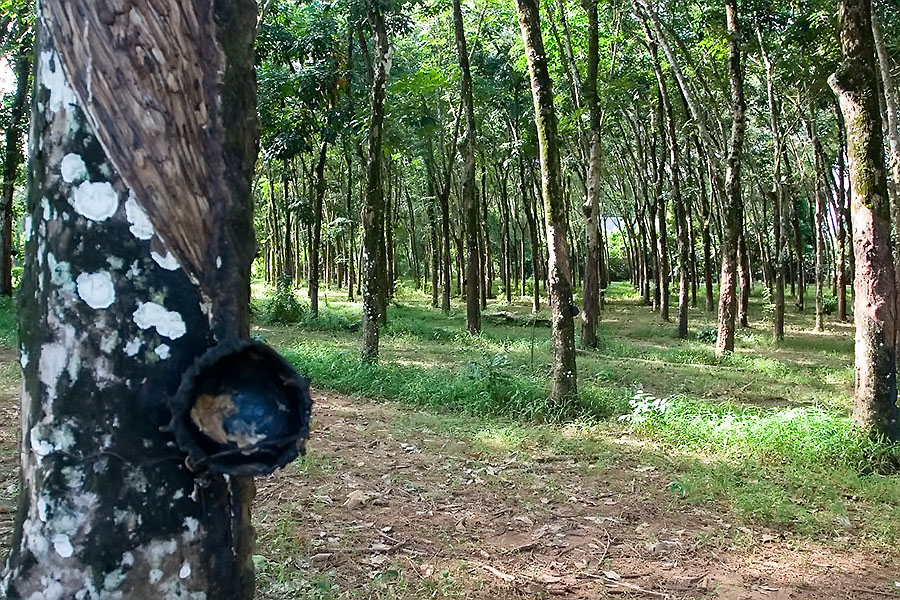 In 1998, 1.54 million hectares of land were planted with rubber trees producing 2.16 million tons of rubber of which 1.9 million tons was exported. The AIDS scare benefited Thailand's rubber industry as it created a worldwide increase in demand for condoms. Thailand is now the world's largest producer of natural rubber.

With fertile land in much of the country and perfect growing conditions year-round, fresh tropical fruit abounds in Thailand. One of the great pleasures of living in Thailand is to be able to buy delicious fresh fruit at any time of the year. 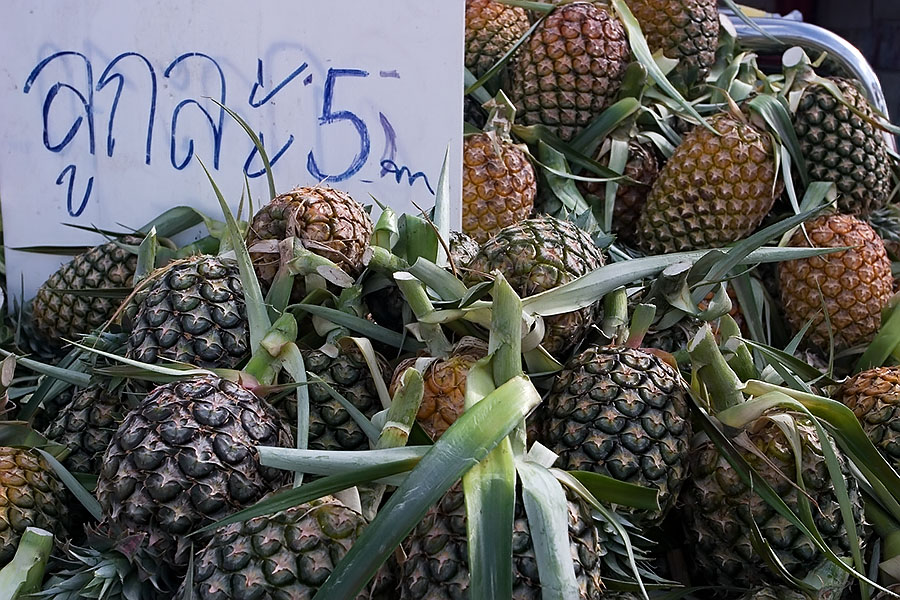 Pineapple, durian and longan are the major fruit products but others include mango, banana, pomelo, mandarin, mangosteen, rambutan, lychee, rose apples, grapes and coconut. In my experience, tropical fruit is like insects. No matter how many different types you have seen, a new one always appears that you have never seen before.

Note: Thailand may have started growing grapes but viticulture has a long way to go yet. I've had the misfortune to sample wine made in Thailand on a couple of occasions and it was truly disgusting.

Some of the fruit is canned for export, for example rambutan and longan, but pineapple is Thailand's most important canned fruit export. Without doubt, pineapples from Thailand are the sweetest and best in the world. If I buy a selection of fruit, my selection always includes pineapple.

My Thai friends inform me there are two main varieties of pineapple - Phuket and Phattalung, with the latter being sweetest. On one stretch of road going into Phattalung province there are lots of vendors on both sides of the road with stalls set up just to sell pineapple. In the north is grown a very small variety of pineapple that is exceptionally sweet. It's definitely worth trying if you spot any.