Links To All Tutorials 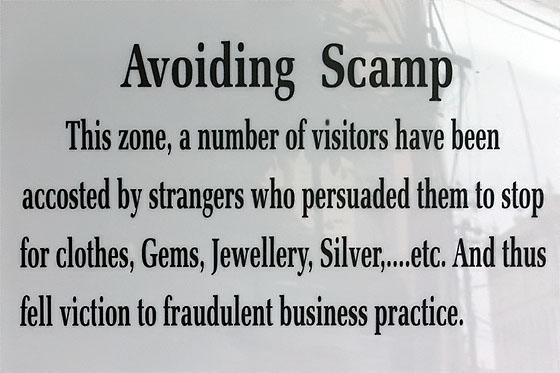 Learn How To Read Thai - Tutorial 2

This tutorial covers another consonant and our first vowel. I will also introduce the tone rules.

It is also a letter that many Thais have problems pronouncing. In colloquial Thai it either gets left out completely (kup instead of krup for the male polite particle) or changed to an 'l' sound (haa loy baht for Bt500).

As a final consonant it becomes an 'n' sound if it follows a vowel. The Thai word for food (aa-harn) ends with this letter.

Unusual spelling rules are one of the things that can make Thai difficult for beginners. The word above is two consonants - p and r. However, because the ror reua consonant is a final consonant and doesn't follow a vowel it becomes 'orn'.

I'm telling you the truth:

Sometimes ror reua is stuck on the end of words, but it is completely redundant and there is no gaa-run symbol to indicate that it is redundant.

As a new learner, how do you know? You don't. When I sent SMS messages in Thai misspelling 'jing jing' (I spelt it phonetically and omitted the ror reua) I was corrected and learnt from my mistake. How do learners of English learn weird spellings? How do Thai children learn how to spell?

There are no rules. It simply comes down to practice and familiarity.

Also be careful if you see two ror reua consonants written together, as this combination has special rules as well.

Now on to our first vowel.

The Thai word for vowel is sa-ra and vowels are referred to as sa-ra plus the vowel sound. Therefore, this is known as sa-ra uh.

The sound is like an 'u' as in 'cup' or 'but'. However, it is normally walways transliterated as 'a'. It sounds nothing like the 'a' in 'cat' so 'a' sounds wrong to me.

คะ (Consonant-Vowel if there is no Final Consonant)

Now, if we take all the letters learned so far, we get:

The first two consonants form a consonant cluster 'gr'. This is not always as obvious as it seems in Thai because of implied (unwritten) vowels in between consonants but more about that later.

These three letters make a short, sharp gruh sound. If you start to say the word 'grub' but stop before you get to the 'b' that should be quite close. This syllable comes at the start of many Thai words.

You probably know that Thai is a tonal language and you may be wondering what tone this syllable is, and how to work it out.

When you apply the rules for this combination, you can see that we get a low tone.

I still get e-mails about transliterating these vowels and, quite frankly, arguing about which English letters are the equivalent of Thai letters is completely pointless and a waste of time. There are no correct ways to transliterate, only wrong ways. It's like arguing whether the sound a cat makes should be spelt miaow or mee-ow.

I hate transliteration with a passion, but it is a necessary evil for people in Thailand who can't read Thai and also new learners. I have to do it, and when I do I ignore the horrendous transliteration systems and make an attempt to do it as phonetically accurate as I can.

The first syllable in Krabi ends with the uh sound and there is no final consonant. Here's an example of where this sound comes in between two consonants in a mid-position. When used this way, it is known as mai-hun-aagaat. It is written a different way and placed above the initial consonant, but the vowel sound is the same.

This word means 'bite' and is pronounced gut but you mustn't fully release the final 't' sound. The tone rules for this word are the same as the one above. There is no tone mark used. The initial consonant is mid class, and it is a dead syllable that uses a short vowel. It is therefore also pronounced with a low tone.

The following is the Thai verb to love and it uses the letters we have covered so far.

Can you see this word in the following image? 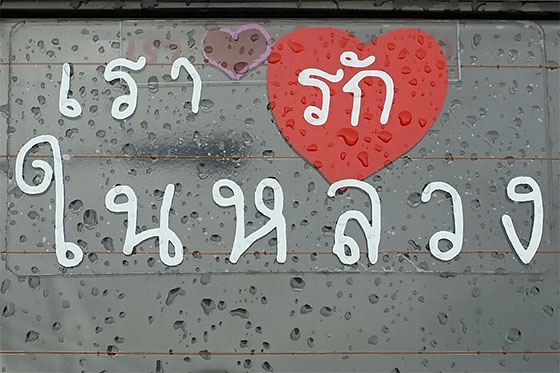 We love the King

Should this Thai vowel be transliterated as 'a' or 'u'? Ask a Thai to say the word for love and listen. Listen to the final consonant sound and listen to the short vowel. Does it sound like ruck or rack? You decide.

In the next lesson, we shall continue with more Thai characters. Easy, isn't it? I'm trying to keep things simple so as not to deter people. Quite a few people arrive at Tutorial 1, but don't get much further than that. I can help you, but I can't perform a Mr Spock mind meld and instantaneously transfer my knowledge of written Thai to you. Nothing worthwhile having in life comes easily and learning to read Thai, which is an extremely useful skill if you live in Thailand or visit Thailand often, will take a certain degree of effort on your part. If you have any questions so far, please let me know.

Also, if you can already read Thai and spot any mistakes or misunderstandings on my part, please let me know.

If you have any comments, questions or suggestions, feel free to contact me. Your feedback will help me to improve these pages.